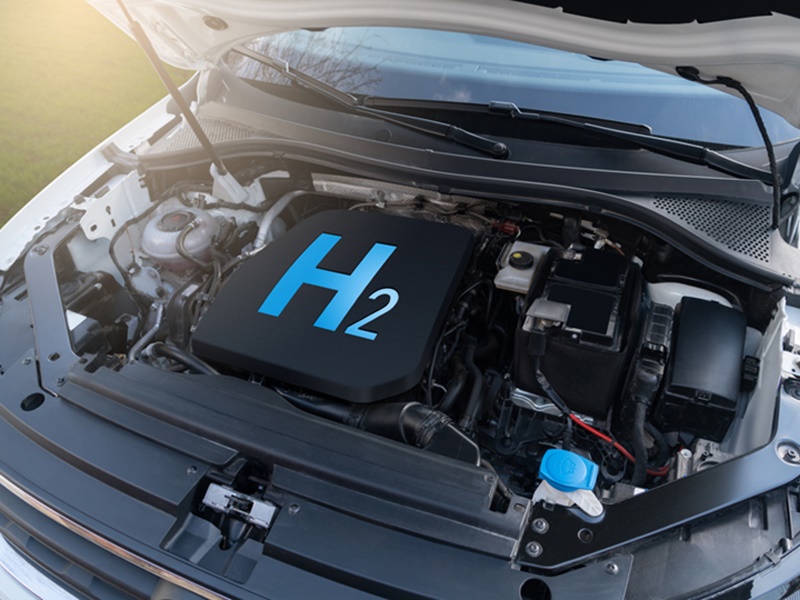 When people talk about sustainable mobility, the first thing that comes to mind is battery-powered e-cars. Fuel cells or direct hydrogen burners are complementary technologies that often fade into the background yet have a lot to offer when it comes to CO₂ reduction and market options.

The German and European automotive industry takes a similar view as shown in a recent German Expleo study: 80% of the car manufacturers surveyed stated that they consider hydrogen-powered vehicles to be more environmentally friendly and cleaner than electric cars. While 64% believe that the first hydrogen cars ready for series production will be on the market in the next two years.

What is needed is a more innovative spirit on the part of manufacturers and suppliers, support from politicians, and investments in better energy infrastructure. Companies in the ACES environment, (ACES stands for autonomous driving, connectivity, electrification, and shared mobility) need efficient and future-proof production facilities, the keyword being Smart Factory. Production lines must be automated, and digitalized, manual processes eliminated, and innovations are driven forward.

Modern and automated battery and fuel cell production, supported by robotics, sensor technology, and AI, is at the heart of sustainable strategies. The battery is the central element of both hydrogen drive and “classic” e-vehicles, albeit significantly smaller and differently constructed.

In addition to e-drives and hydrogen, e-fuels, and synthetic fuels, should also be mentioned in the mix of sustainable drive types. To use hydrogen in a truly sustainable way, the H₂ fuel must be produced with electricity from renewable sources (electrolysis), which is not yet fully feasible in large quantities.

Conversion of the chemical into electrical energy

In hydrogen-powered vehicles, the process works the other way round: hydrogen (H₂) and oxygen (O) are converted into electricity and water (H₂O) in the fuel cell. The resulting energy drives the electric motor. Fuel cell cars are therefore also electric cars, although the battery does not have to be charged before driving. Instead, the required electricity can be produced in the car by H₂ supply.

The energy conversion from chemical to electrical energy in a polymer electrolyte membrane (PEM) fuel cell is based on the following functional principle, hydrogen is delivered to the anode and oxygen to the cathode via the flow channels of the bipolar half plates (BPHP). Via the gas diffusion layer (GDL), the hydrogen diffuses to the anode side of the catalyst-coated membrane (CCM).

Some big automotive companies are too cautious about hydrogen

Unlike battery cells, fuel cells are not dependent on raw materials such as lithium or cobalt. The raw material dependency means, battery manufacturers are heavily reliant on China. In fuel cells, the central material is iron. Another advantage is that hydrogen as a molecular substance can be easily stored, transported, and made available for applications.

In 2020, a total of only (FCEVs) were newly registered in Europe. Compared to 2019, this was a minimal increase of 266 passenger cars. Hydrogen vehicles are an important pillar of climate-friendly mobility – if their opportunities and possibilities are researched, expanded, and used on a larger scale. European automotive players are often more innovative in this respect and acceptive to hydrogen than some large German corporations, which are primarily dedicated to e-mobility.

There is no way around New Energy Vehicles, so-called NEVs if we are to even come close to achieving the Paris climate targets. Hydrogen can be produced from renewable energy sources in a CO₂-neutral way and converted into electrical energy in fuel cells.

Flexible and scalable production lines that can be quickly and easily adapted to individual requirements are advisable. Approaches are needed to reduce the production costs of fuel cells, as this is the only way this technology will be accepted in the longer term.

Unlike battery cell production, where processes have already been automated for many years and are constantly being further developed, fuel cell production is still almost at the beginning. This is mainly because hydrogen technologies do not yet have the application and acceptance that increased production requires. Many workflows are therefore carried out semi-automatically or even manually.

To make hydrogen applications more attractive, increased automation in manufacturing is urgently needed. Since battery and fuel cell manufacturing are similar in many respects, it is advisable to rely here on a partner who is familiar with automated battery cell manufacturing. In addition to the technology and know-how, system integrators and machine builders are also needed to jointly drive this topic forward.

A particularly critical process in battery and fuel cell production is stacking, this is where errors, such as leaks, can occur. Finding the cause takes a lot of time. Stacking expertise is therefore also recommended. In addition, the membrane must be handled carefully so that it is not damaged.

The cornerstones of future-oriented fuel cell production to promote sustainable mobility, are the procedures and technologies of the Smart Factory. They make it possible to comprehensively modernize production and rationalize supply chains from the ground up in parallel with the expansion and conversion to new drive technologies. Innovative industrial robotics, mobile robots, and cobots, edge computing, sensor technology, the coupling of mechatronics and IT, and augmented reality (AR) are some examples of this factory floor of the future.

The highest possible degree of digitalization is the key to success so that the manufacturing process can optimize itself independently. Traceability is also essential, ideally to be able to trace every single layer of a fuel cell to conclude where production is not running optimally.

Another pillar is artificial intelligence (AI), as it can be used to unleash new efficiency potential from highly complex production chains. Used correctly, AI can help business leaders in the automotive sector to better understand their processes. The information collected by AI and sensor-based technologies leads to new insights to optimize processes inside and outside the company.

An example is a predictive maintenance – it can be used to detect wear patterns, peculiarities, and anomalies, and thus counteract machine failures, downtimes, and errors. AI can also help to capture market share in blue ocean segments – new innovative markets. Particular attention should also be paid to seamless and flexible intralogistics processes, the keyword being transparent supply chain.

In the coming years, a mix of different drive technologies will establish itself on the market. This includes the fuel cell as an important building block. For alternative technologies of the future to gain momentum, it is now up to politicians, manufacturers, and service providers to pull together, optimize framework and production conditions and promote digitalization and automation.

OMRON can support here, with their many years of expertise in this field, as well as having the technologies and strategies of the i-Automation! model.  In fuel cell production, the company places a special focus on high speed and precision. Newly developed edge-based algorithms (Shape Search III) are used. Fewer data are used for position adjustment to increase transparency.

At the same time, several processes work in parallel, which minimizes production time. Permanent position adjustment is dynamically corrected between NX and FH, and high-precision position adjustment is accelerated. These are all examples of technological adjustments that can optimize fuel cell manufacturing – so that the hurdles for increased engagement in this field (hopefully) tumble.