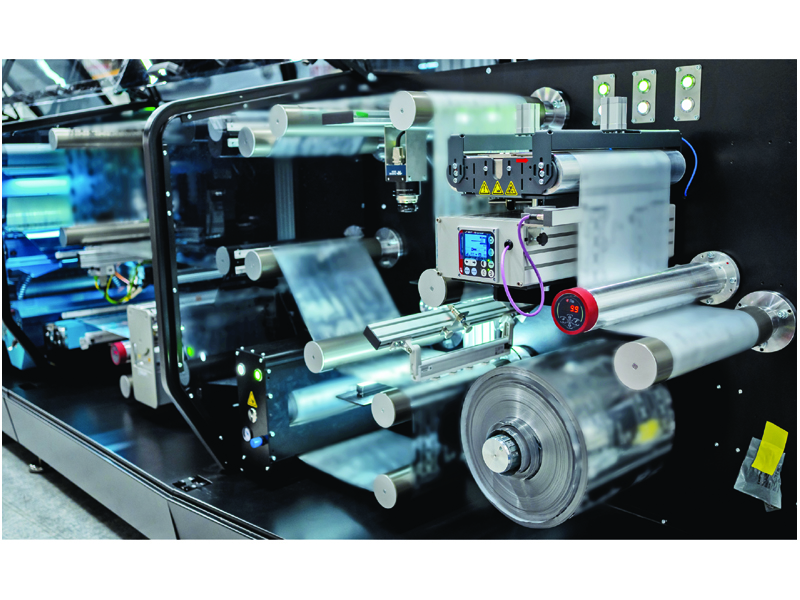 Traditionally, printed circuit boards — whether solid or flexible — are mostly produced by etching. The Swedish company DP Patterning, on the other hand, has developed a different approach: Using a patented process, the conductive structures are worked out of flexible circuit boards in a mechanical process.

Equal measures of accuracy and speed are needed to achieve this both precisely and economically. And PC-based control and EtherCAT are the optimal control technologies to accomplish this.

DP Patterning was founded by Staffan Nordlinder in 2006 in Norrköping, Sweden. The company has been researching and developing the manufacturing technology known by the same name – Dry Phase Patterning, DPP – for flexible circuit boards on a continuous basis ever since.

The innovation phase began in 2001 when Staffan Nordlinder worked as a scientist at the Swedish research institute RISE (Research Institutes of Sweden). This has led to intensive cooperation and continuous DPP technology research to this day.

By means of DPP, conductive structures can be produced on flexible materials. The functional principle is basically as simple as punching a hole in a piece of paper or the classic embossing technique. A rotating die with the negative pattern of the eventual finished structure presses the carrier material against a rotating milling wheel.

The carrier material is coated with an ultra-thin conductive top layer. The milling machine removes the upper layer mechanically. The lower carrier material remains untouched. This will leave the conductive pattern on the laminate — the flexible circuit board is then available in reel form.

The process works with a variety of different carrier materials, including PET (polyethylene terephthalate), PC (polycarbonate), PI (polyimide) and PEN (polyethylene naphthalate). Al (aluminum), Cu (copper) or CCA (Copper Cladded Aluminum) is suitable as a top layer, depending on the thickness required.

DPP can be used for non-electronic and non-conductive applications, too. These may include plastic or paper decorations or functional 3D structures such as microfluid channels or cavities for levelling out electronic components.

The patented process offers immediate benefits for electronic component manufacturers. These include increased cost efficiency, shorter lead times and environmentally friendly, sustainable production with no need for chemicals or hazardous substances. In addition, the metal chips can be recycled.

Not to mention the security aspects – integrating it into a company’s production processes means the manufacturer retains all the intellectual property. One special feature of DP Patterning’s machines is their ability to produce both prototypes and large quantities on one line simultaneously. Long lead times and days of testing would make this difficult when using conventional methods.

Due to the very thin base materials and material thicknesses to be removed in the single-digit µm range, the DPP process necessitates high-performance automation technology and the integration of as many components as possible into a continuous system. That is why DP Patterning has been working with Beckhoff since its foundation.

A CPU was initially used in subsystems for communication with an external system. Since 2016, the company has been relying entirely on Beckhoff technology: AX5000 Servo Drives, HMIs, I/Os, and now also image processing seamlessly integrated into PC-based control with TwinCAT Vision software. Completely integrated into the user interface, the operator can now actually control the material removal directly via TwinCAT HMI. This improves the level of user-friendliness while making the milling parameters easier to configure.

The metal layer on the foils is about 10 times thinner than a human hair, requiring extreme precision during processing, as well as adjustments in the range of 100 nm. “One of the biggest benefits of Beckhoff products is the impressive speed of the process cycles that we are able to realize,” says Jakob Sagatowski, software engineer at DP Patterning. “The results are impressive when we compare it to other control manufacturers. Our machines can mill approximately 0.5 mm patterns in 1 ms when running at full speed. This is equivalent to 0.5 m/s belt speed and significantly faster than is currently common in practice.”

The capturing and archiving of production data is another key requirement. “Our technology keeps on getting developed further, thus requiring tracking data – the more the better,” says Staffan Nordlinder. Database connectivity and mass storage are therefore an important key to optimizing the production line configurations. PC-based control contributes significantly to this.

For one thing, DP Patterning can use all programs seamlessly on an Industrial PC. This simplifies the system’s configuration. On the other hand, it enables customers to invest in cost-effective standard hardware solutions.

Potential through the integration of AI

Anytime large amounts of data need to be analyzed, artificial intelligence (AI) or machine learning (ML) is now always a key point of discussion. Especially since, as an innovative company, DP Patterning is now constantly on the lookout for the next technical breakthrough. As Jakob Sagatowski explains: “This could involve the integration of artificial intelligence, for example further refining predictive maintenance and production optimization with TwinCAT Machine Learning.” The extended use of image processing is also being considered: Using TwinCAT Vision and special functions, the Swedes now want to detect and mark interrupted conductor paths so that they can automatically omit them from the subsequent work steps.