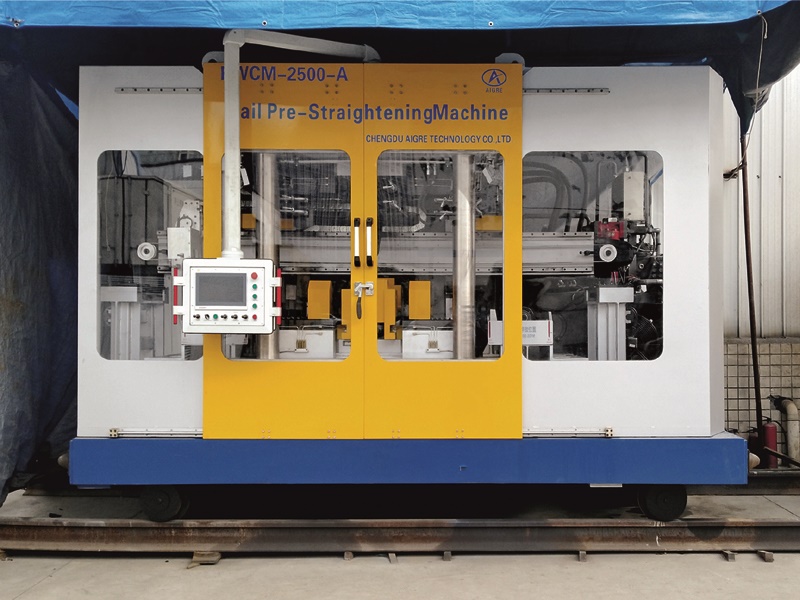 When it comes to producing high-quality railroad tracks, two Chinese specialists rely on the performance of PC-based control technology from Beckhoff: Chengdu Aigre Technology Co., Ltd. (Aigre Tech) applies it with a rail-straightening machine to create seamless tracks, as does China Railway Chengdu Group Co., Ltd. with a tandem crane lifting system made up of four overhead cranes.

Founded in 2003, Aigre Tech is a high-tech company that forms part of the SWJTU industrial group located at the Chengdu Modern Industrial Park. The company has developed over 100 machines to date, and these have been used to a large extent for producing seamless tracks in the rail transport sector, e.g., for high-speed trains, heavy-duty trains, inner-city subways and light-rail systems. The key to creating these seamless tracks is in the quality of the welds between rails and the straightness of the rails, all of which has a direct impact on safety, comfort and the service life of the rails.

Due to the difficulties caused by lateral bending of the rails during the welding process, among other things, it is not possible to guarantee straightness. This is where the RWCM-2500-A rail-straightening machine comes in, newly developed by Aigre Tech and equipped with PC-based control technology from Beckhoff. It is primarily aimed at the high-end export market and can detect both horizontal and vertical bending defects in welded joints and straighten these automatically.

For this purpose, the rail is initially scanned horizontally and vertically with a line laser. After the rail has been fixed in place with a clamping and positioning unit, it is corrected several times by four straightening hydraulic cylinders until it meets the quality requirements. An expert system based on fuzzy logic technology (many-valued logic) is used here.

After extensive evaluations, Aigre Tech opted for the integrated control platform from Beckhoff as a complete solution. This was due to its high level of reliability, clear system architecture, simple remote maintenance and use of established programming standards in accordance with IEC 61131-3.

The straightening machine uses the powerful CP22xx multi-touch built-in Panel PC (dual-core Intel® Celeron® processor with 2.2 GHz) to implement all of the control functions. Servo drives from the AX5000 series are used for axis control. An EtherCAT I/O system in a ring network architecture provides fast and reliable data communication. The high computing power of the CP22xx supported development of the user interface directly in the controller using C#. The data is synchronized with the control program and updated via ADS in millisecond intervals.

The system requires high-quality data to control the straightening process correctly. Both the database and set of rules are based on Aigre Tech’s practical experience with welded rail connections. The conventional control system used previously had relatively poor data processing and storage capacities. With TwinCAT Scope View software, Aigre Tech believes that the Beckhoff control platform, on the other hand, provides a powerful and efficient solution that simplifies the recording of rail positions, curvature, force applied, etc., and makes it possible to develop the core database required in a convenient manner.

The powerful Beckhoff hardware and software platform, according to Aigre Tech, increases not just machine availability but also system performance. The first machine equipped with PC-based control in November 2019 successfully passed the comprehensive test for straightening 60 kg/m, UIC 60 and UIC 52 rails, as well as the final approval of the end customer – India’s Ministry of Railways.

According to the China Railway Chengdu Group Co., Ltd., the key challenges in controlling tandem crane lifting applications are improving the efficiency when handling long railroad tracks, preventing rails from warping during the lifting process and precise synchronization when lifting or lowering rails. With PC-based control from Beckhoff, the company successfully achieved these requirements in a lifting system used in southwest China to handle single-piece rails, which are generally 100 m long. China Railway chose their control platform based on the following requirements:

More specifically, CX5120 Embedded PCs (Intel Atom® processor with 1.46 GHz) are used as the main controller for each overhead crane as well as TwinCAT software for the logic functions and NC PTP for precise positioning and synchronization of the overhead cranes. The CX5120 records the external position signal and the data from the laser distance sensor used to move the crane and hook and to raise/lower the hook via the EL5001 SSI encoder interface terminal. Functions such as position control and collision avoidance were implemented via standard TwinCAT NC function blocks. The 1 ms control cycle time implemented here resulted in a significantly increased system response speed, according to China Railway.

The sensor signals distributed across the entire overhead crane structure (e.g., position switch, limit switch, load signal) are controlled via decentralized substations – with the EK1100 EtherCAT Coupler and EL1809, EL2809 and EL3154 EtherCAT Terminals, among others. These substations and the individual modules are connected via EtherCAT, which is what a spokesman for China Railway believes ensures the quick and reliable transmission of all signals: “The real-time properties of EtherCAT exceed those of traditional bus systems by far. According to the crane operators, the control sensitivity of the overhead cranes has also improved considerably.”

As the distance between several overhead cranes can be up to 25 m, the visual observations of the operators are of particular importance. Therefore, in addition to the strict safety precautions that ensure normal operation of the system, numerous pieces of data are to be recorded and monitored, including the driving speed, distance between overhead cranes, their positions and the rail lifting height.

It is therefore important to have a user-friendly HMI which – according to a spokesman for China Railway – can be supplied with data efficiently and flexibly via ADS and, as a result, is very easy to implement with a wide range of development software packages. What’s more, TwinCAT Scope View allows users to record, monitor, manage and analyze operating states, the degree of efficiency or any faults and their causes easily and reliably. China Railway summarizes it as follows: “We have been able to significantly improve the efficiency of the lifting system with PC-based control from Beckhoff. The control system has exceeded our expectations and is very much appreciated by our engineers.”