A Revolutionary Idea Celebrates its Anniversary 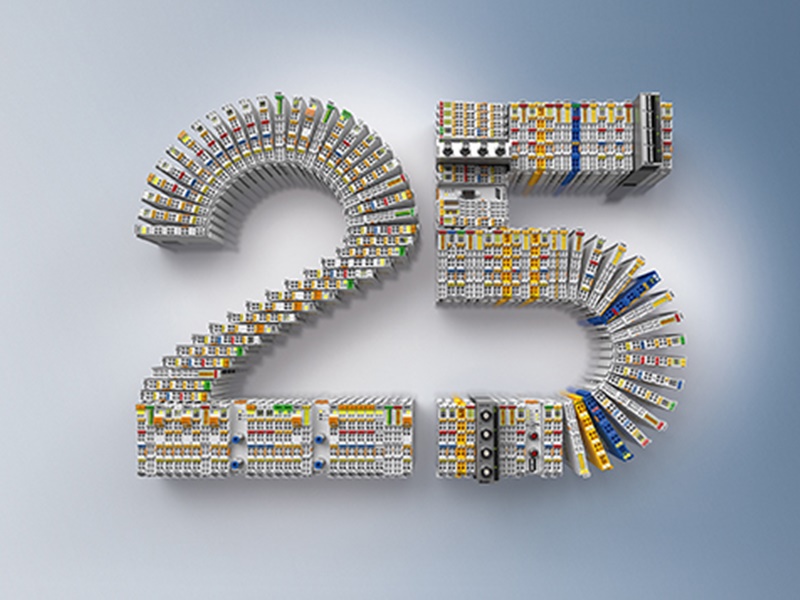 The modular and open I/O system for space-saving, customizable and highly flexible configurations was then presented at the Hannover Messe trade fair in 1995.

As an industrial electronics and communication specialist, Beckhoff intentionally continued the advancement of the existing block module concept for the electronic terminal block. In itself, this significantly reduced cabling requirements for I/O installations. However, the new Bus Terminal concept went one step further: The aim was to replace the traditional modular terminal block with an electronic version.

When developing this innovation, Beckhoff drew on its many years of automation experience together with its specific expertise in fieldbus technology, communication technology, control cabinet construction and the development of industrial hardware and software.

Thus, the process not only developed the complete hardware, software and K-Bus communication for the terminal system, but also a complete product family with Bus Couplers as well as Signal and System Terminals. The result was a fieldbus-independent, highly modular I/O system.

Following the introduction of the Bus Terminal in 1995, this technology quickly went on to become a worldwide and universally accepted automation standard. This applies, in particular, to Beckhoff’s system concept: 25 years of development and application experience are reflected in the broadest I/O portfolio on the market.

Bus and EtherCAT Terminal technology is used today in an extremely wide range of applications, from machine automation to Ethernet-based building automation and process technology.

Contributing to this success has been both continuous development and close cooperation with customers, which has often given rise to new product ideas and developments. This successful collaboration has resulted in today’s comprehensive IP20 and IP67 I/O portfolio from Beckhoff, which is still based on the original Bus Terminal idea.