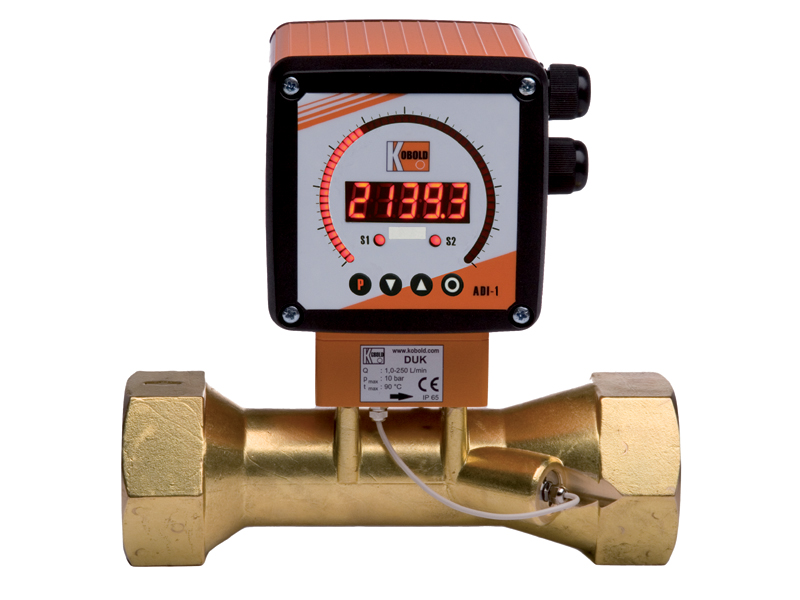 Bi-directionally transmitted ultrasonic waves provide precise results of volume flow as the result of their transit time difference. Installed in any position, the units can measure ranges of 1:250.

Announcing the release of Kobold’s new DUK flowmeters, for measuring, monitoring, metering and dosing of low viscosity fluids.  Working on the principle of the difference in running times, (ultrasonic waves in a medium are influenced by the speed of flow), two sensors are mounted opposite one another in the pipeline function simultaneously as transmitter and receiver of ultrasound signals.  If there is no flow, the running times of both signals are identical. If the medium is flowing, the running time of the signal against the flow is longer than that with the flow.   The running time difference, determined by a microprocessor, is thus proportional to the speed of flow.

The devices can be equipped with a switching output, a frequency output or an analogue output. In addition, a compact circuit can be selected that features a digital display, a switching output and an analogue output.  The device series is rounded off by an optionally available dosing and meter circuit. The meter circuit indicates the momentary flow rate in the first line of the display and the partial or total quantity in the second line. A dosing circuit controls simple filling tasks and similarly measures flow rates, total amounts and filling amounts. The analogue output and two relay outputs can be used for further processing of the signals.

The electronics portfolio of the DUK all-rounder includes: