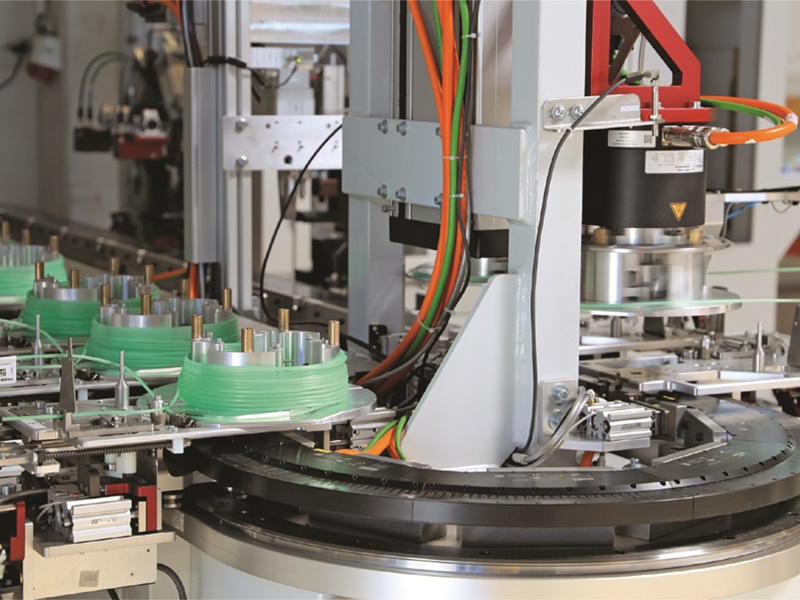 Austrian custom machine builder TEUP normally adapts its design work to specific customer requirements. The only exception to date: an extremely adaptable assembly line, which the engineers developed on their own initiative and which will be available in the future as an individually configurable “standard solution.” The assembly line has a modular design, uses PC-based control and is equipped with the highly flexible eXtended Transport System (XTS) from Beckhoff.

Since its founding in 1996, TEUP – Technische Entwicklung und Produktions GesmbH (Technical Development and Productions) – has transitioned from making fixtures and molds towards special-purpose machine production. “We have gradually grown into this field and have faced increasingly complicated challenges,” says Markus Resch, Head of Electric and Software at TEUP.

Over those 25 years, the solution expertise of the engineers from Austria’s southern state of Styria has ranged from the design of a simple workstation with a manual toggle press to a fully automated assembly line incorporating 50 individual processes.

TEUP had a clear motivation to provide a standard solution for the first time, as Markus Resch explains: “When one of our customers withdrew from a very specialized business area, we decided to fill the gap. As a sub-supplier for many years, we know exactly what is most important when it comes to systems for this market niche.” Alexander Imhof, mechanical design engineer at TEUP adds: “Due to its modular design, the assembly line should be individually adaptable to the respective requirements, and it should be easy to ship to all countries in the world.”

The aim of the machine concept was therefore to establish maximum compactness and flexibility above all. Numerous processing stations needed be integrated into the overall system for this purpose – virtually as a modular system.

Markus Resch describes it as follows: “We are talking about an assembly line in which plastic hoses made of polyethylene are cut to the desired length, wound into bundles, fitted with various connectors and seals, labeled and subjected to a final check by laser measurement.”

TEUP employees are experts in deliberating on and evaluating various technologies. After all, as special-purpose machine builders, they are used to searching for the best possible solution to any task. Alexander Imhof frequently also uses YouTube as a source of inspiration, and that is how he discovered several Beckhoff videos about XTS while searching online for a suitable product transport solution: “We examined several alternatives in detail. However, the complete package offered by Beckhoff was the most convincing: global support, the easily scalable PC-based control architecture and the range of products available from a single source, including servo drives, servomotor terminals, controllers for third-party motors and servomotors, as well as a wide range of I/Os and TwinSAFE.”

As a result, the new assembly line is equipped with numerous Beckhoff components, including the EL9227-5500 electronic overcurrent protection terminal, which displays large amounts of process data and saves any events to a shutdown history, and the CU2508 real-time Ethernet port multiplier, which manages the multi-line EtherCAT communication between the central “brain” of the assembly line, a C6930 control cabinet Industrial PC (IPC), and the XTS transport system.

With XTS it was above all the flexible design options that appealed to Alexander Imhof: “We are not bound by any fixed distances; no stoppers are required, and the individual processing stations can be arranged in the precise sequence required by the respective customer. It is also very important that subsequent changes to the original assembly line design can be implemented without any problems.”

At present, the engineers from Styria are also considering adding an XPlanar system to optimize the infeed and outfeed of raw materials and finished products. An associated design concept has already been released for consultation with Beckhoff. During the construction of the prototype, which TEUP will keep in-house for testing and demonstration purposes, one thing became clear: the best ideas come from an open exchange of information and opinions.

For example, it was not originally planned to use the C6930 IPC to also control the two Stäubli robots involved in conjunction with the XTS system. “This only became clear during commissioning, as it enabled us to achieve faster cycle times and thus better synchronization with the movements of the transport system. This was implemented easily and efficiently with the TwinCAT Robotics uniVAL PLC library,” explains Gerhard Holzer, Support at Beckhoff Austria.

“Now we really have one control computer for everything,” says Markus Resch, pleased that only one IPC needs to be configured for the automation of the entire assembly line. This is a significant advantage for a line that is to go into series production in the same or at least a very similar form.

The aim of higher machine flexibility was clearly established, according to Alexander Imhof: “In the past, customers were limited to a rigid production line of 30 m in length. Now, with an assembly line footprint that is smaller by a quarter, it is possible to produce the same number of units of a product or even several product variants simultaneously.”

In addition, even with the standard XTS currently used – with 10 movers and an oval, 8 m track length – three to four additional processing stations can still be integrated as required.

When changing formats, e.g., for a conversion to other winding lengths, XTS and PC-based control technology eliminates mechanical adjustments and re-programming in the 6-axis machine responsible for feeding the material. These changes can be made simply with a mouse-click in TwinCAT software, which, according to Markus Resch, reduces setup times from 20 minutes to just 1 minute.

He also summarizes: “The individual plastic hoses are now precisely wound to the specified final dimension to the millimeter. With the old line, there were always minor deviations. In addition, the machine design developed in close cooperation with Beckhoff helps us implement another vision for the future: an assembly line that is so easy to move from A to B that it is suitable for final production in the immediate vicinity of the point of use of the product.”