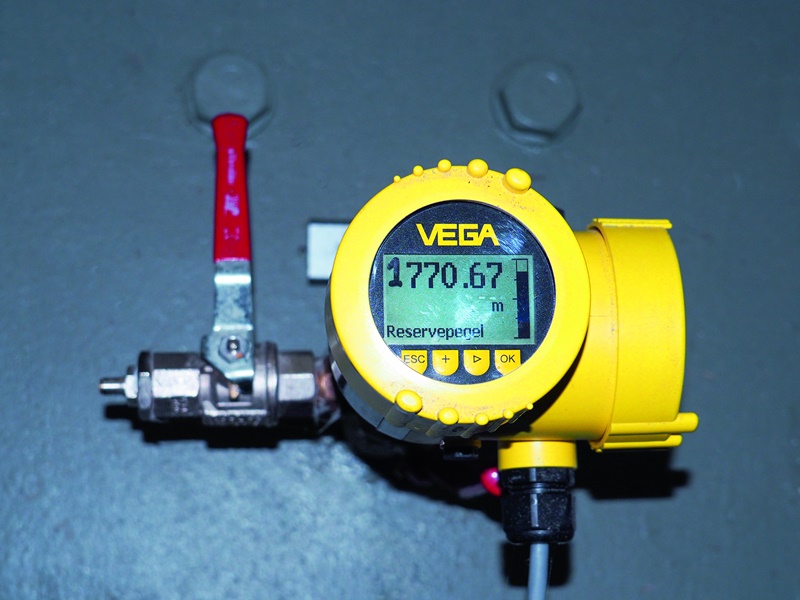 The Schlegeis reservoir is part of the “green battery” that provides balance and control energy and also contributes to flood protection in Zillertal. A pressure transmitter from VEGA now measures the water level exactly to the centimetre and is thus, together with a level scale, an important component of the safety system of the dam.

For many tourists, Schlegeis reservoir is an idyllic recreation area in the mountains. For Michael Sporer and his colleagues the lake is an important part of the safe, clean and affordable power supply. “Schlegeis is one of the green batteries of the Alps,” explains Michael Sporer, who, together with his team, is responsible for the control technology in the Zillertal power station group of the Austrian power company VERBUND. The high-capacity storage power station group Zillertal consists of eight power stations, seven reservoirs and numerous stream channelling systems. The Schlegeis reservoir, located at an altitude of 1782 meters, can accommodate up to 126.5 million cubic meters of water and, with its imposing 313-meter high and 725-meter long dam, is a sight to behold. To get a better idea of the immense volume of the storage lake: The volume corresponds to a three-meter wide and one-meter deep ditch around the entire Earth at the equator. The lakes work like batteries. “When the demand for electricity is low, the pumped-storage power station Roßhag and Häusling pump water from the Stillupp reservoir to the higher Schlegeis and Zillergründl reservoirs. But when electricity is needed, for example at peak demand times, we can route the water from the reservoirs to the power stations within minutes via hydroelectric tunnels,” continues Sporer.

All the power stations belong to VERBUND, Austria’s leading power company and one of the largest producers of hydropower in Europe. Every year, VERBUND generates around 30 billion kilowatt hours of electricity from renewable sources. In addition to supplying power, the reservoirs play an important role in flood protection. The large Schlegeis reservoir holds back snowmelt and storm water run-off, thus contributing to flood protection in Zillertal.

All of the facilities, whether it be power stations, reservoirs or stream channels, are interconnected via tunnels, which often run for kilometres through the mountains. The water masses are controlled by a complex interplay of turbines, pumps and valves. All systems are automated, but also centrally monitored and operated from the central control room in Mayrhofen, where Sporer and his colleagues work.

Sporer says that he’s been working together with VEGA for roughly 30 years already.  Sensors for solids detection, differential pressure measurement as well as level and pressure are used at many different locations in the power station network – in the various valve chambers and stream channels, for example, but also in the Roßhag generating station with its enormous turbines. “I estimate that over 80 measuring points are equipped with VEGA sensors. Especially in the past six to eight years we have expanded our sensor inventory enormously.”

One of the measuring points is responsible for a particularly important task. Not only for economic reasons is it crucial to know the exact level of the water in the reservoir, but also for safety reasons. “Considering the large surface area of the lake, every centimetre of additional height translates into an enormous amount of water,” explains Sporer. “Although it hasn’t happened yet, a reservoir can, theoretically, overflow in severe weather conditions, such as prolonged heavy rain or thunderstorms. In order to avoid such an event, we have implemented a comprehensive package of security measures, e.g. the rerouting of streams. Exact information on the water level is thus absolutely necessary.”

To ensure that the high accuracy requirements are met, level scales are prescribed by the regulatory authorities. These devices measure the level of the reservoir over the entire height, i.e. 120 meters, with centimetre precision. The authorities also require a redundant measurement. Level scales meet the accuracy requirements but are also very cost-intensive. For that reason the power company looked for a less expensive solution. Up to that point, VERBUND had been using a pressure measuring system for the redundant measurement. It basically fulfilled the accuracy requirements, but the measured value output had a relatively high hysteresis. Although the company had managed to live with the pressure measuring system for some time, it was decided that a better solution had to be found for the long term. “From our experience we knew that VEGABAR 82 could easily handle the task. The only problem was the measurement data output, as the analogue resolution was no better than 7 to 8 centimetres,” continues Sporer. The universally applicable pressure transmitter VEGABAR 82 has an abrasion-resistant ceramic measuring cell and is characterized by maximum operational reliability and safety. Its sensing element is the CERTEC® measuring cell with robust ceramic diaphragm. The process pressure deflects the ceramic diaphragm, thus effecting a change in capacitance in the measuring cell. This is converted into an electrical signal and outputted as a measured value via the output signal.

But a resolution of 1 centimetre was required! So in order to get a resolution in the millibar range, a VEGABAR 82 of the highest accuracy class, with a measuring range of 0 to 10 bar, was chosen. The problem of measurement data output was solved by means of a HART signal, which was forwarded through a Wago module and converted to a protocol according to IEC 60870-5-104. Now, the operators in the central control room also get the redundant water level with centimetre precision. “It is quite impressive that a pressure transmitter can compete with a measuring system that is 10 times more expensive,” says Sporer about the measurement, which has now been working flawlessly for two years.

Installation and setup were simple and straightforward. “Basically we had two measuring systems we could use to monitor the level value: the level scale and the previous redundant measurement. Since we were already familiar with VEGA sensors, installation and setup went as planned. The sensor was simply mounted on the old mounting socket,” recalls Sporer.

To be on the safe side, the measurements are checked again manually. There are special measuring points in the entire dam that are regularly checked during building inspections. There are also other measuring points – just in the 131-meter-high dam of the Schlegeis reservoir alone there are around 1,000 hidden measuring points, some of which transmit their measuring results electrically to the central control room in real time. In addition, a team of qualified technicians performs regular visual inspections, does additional measurements and records and evaluates the measured values.

Outlook: At the moment, pumped-storage power stations are the only noteworthy technical method for efficient, large-scale storage of electrical energy. Within minutes, water can be sent to the lower-lying power stations to cover peak power demands. Despite decades of experience with the technology (the first pumped-storage facilities were built in the 1920s), the challenges have changed appreciably with the expanded use of renewable energy in the course of the energy revolution. “The more alternative energy is generated, the more difficult it is to predict how much electricity is actually needed throughout the day,” says Sporer. “We’re accustomed to handling peak periods and working very flexibly, but predicting when and exactly how much electricity is needed has now become much more difficult.”  The focus is now on controlling energy flows; there’s no time for non-essential maintenance work. So for the process control team, it’s all the more important that the sensors work flawlessly and deliver reliable measured values, and that repair and servicing are simple and straightforward if malfunctions do occur.