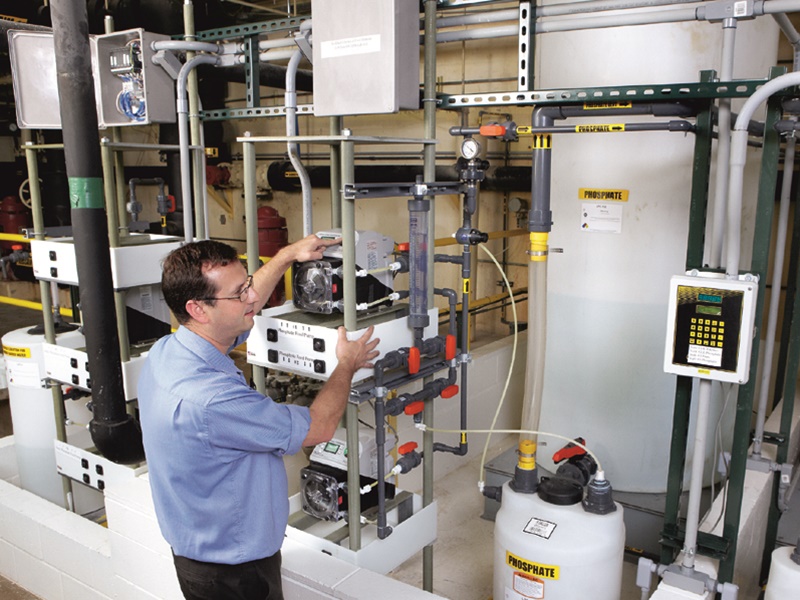 In the public water utilities sector, plant operators must ensure a reliable water supply to all consumers, while at the same time getting by with tight budgets. Their requirements include reliability through redundancy and safe communication of all components with the control system. During the modernization of a municipal facility on Lake Michigan, PC-based control and especially TwinCAT proved to be ideal for integration with existing systems and for future-oriented communication via protocols such as OPC UA, MQTT and AMQP.

Eric Kiefer, plant manager of North Shore Water Commission (NSWC) in Glendale, Wisconsin, knows that providing potable water continues to be an incredible feat even though many people do not give it a second thought. Roughly 35,000 residents in the cities of Glendale, Fox Point and Whitefish Bay rely on this Milwaukee-area municipal entity, which has been pumping clean water since 1963. “People simply cannot suffer a loss of water pressure,” Kiefer says. “Hospitals, businesses, families – they need this water to always be on the moment they need it.”

The NSWC water purification process begins at Klode Park in Whitefish Bay where an intake structure reaches into Lake Michigan. The pump station sucks lake water into a pit-like shore well while a chemical feed system keeps the intake free of zebra mussels, which can quickly clog the system. Four large pumps send the water through a transmission main to the filtration plant in Glendale, where a coagulant and coagulant aid are added to the water. A rapid sand filter removes any remaining sediment left in the water. After the addition of fluoride, water is disinfected with both chlorine and ultraviolet light. Finally, water is treated with a phosphate chemical to prevent lead and copper corrosion as it is pumped to consumers.

On a typical day, the plant purifies 3.7 million gallons of water, but it has the capability to process 18 million gallons per day. It may seem excessive, but if one part of the system failed, the technicians would be able to start a backup right away to safely ensure no customers lose water service.

In the upgrade of an outdated plant, operators would prefer to completely replace conventional supervisory control and data acquisition (SCADA) hardware to avoid communication breakdowns between different makes of machinery. For municipal entities, however, this is not always feasible because of budget constraints. Often it is only the risk of not complying with state or federal water quality standards that motivates municipalities to fund upgrade projects, where additional automation upgrades might get lumped into the project’s budget.

When the Fox Point community decided in 2015 to upgrade its pump station, Eric Kiefer began to research the best alternative automation and control system. His requirements were: cost-effectiveness, reliability, ease of programming and ability to communicate with legacy equipment. Kiefer explains that due to pressure from consumers and outside entities, NSWC cannot afford any mistakes and moreover has to stand up to competition from private contract firms.

Powerful system architecture keeps water pressure up and costs down

Kiefer learned about Beckhoff through a technology partner and quickly decided that Beckhoff products would provide the most efficient option for the project due to the system openness they provide. At the pump station, a number of EtherCAT I/O terminals now communicate with the on-site machinery and equipment. A CP2907 multi-touch Control Panel as HMI is connected to a fanless CX2020 Embedded PC, which offers ample performance to run the complete pump station and transmit all data to the main facility in Glendale.

After building the pumping station’s control cabinet, Kiefer hired Starnet Technologies, a Caledonia, Wisconsin, company that supports the water and wastewater industries, to draft an electrical schematic to document it. On this basis, Starnet later built an identical control cabinet for an upgrade to the pumping station standpipe in Glendale, and the company will soon upgrade the Whitefish Bay station.

The open PC-based control platform from Beckhoff easily allows any add-on software that can run on a PC. Eric Kiefer appreciates not only how well TwinCAT 3 automation software works with other software platforms, but also how new IoT and analytics packages are designed to use innovative cloud communication protocols, including OPC UA, MQTT and AMQP. “There will be a communications paradigm shift in the near future, and working with Beckhoff puts us in a better position to respond to it,” he says. “Beckhoff already has available libraries that we can add to utilize those upcoming protocols, so we’re far more prepared for the future by standardizing on TwinCAT 3.”

The pump stations pass encrypted data over OPC UA using TwinCAT 3 and the CX2020 Embedded PCs to NSWC facilities. Dashboards can display important results. James Redford, president of Redford Data Services, collaborated with NSWC to program a new SCADA system. For the pumping stations, the updated system added greater fault reset capabilities, pump speed control, access via Windows Remote Desktop and more modes of operation. Although Redford was a newcomer to Beckhoff hardware and software then, he found the systems to be very intuitive. It surprised him how well the solutions communicated with other vendors’ products, which is frequently a difficult proposition.

The economical modernization of the plant and the remote pump stations using Beckhoff technology resulted in increased reliability of the entire system and reduced costs. With the open control technology, the plant is now effectively prepared for new methods of connectivity and optimization by means of cloud-based communication.