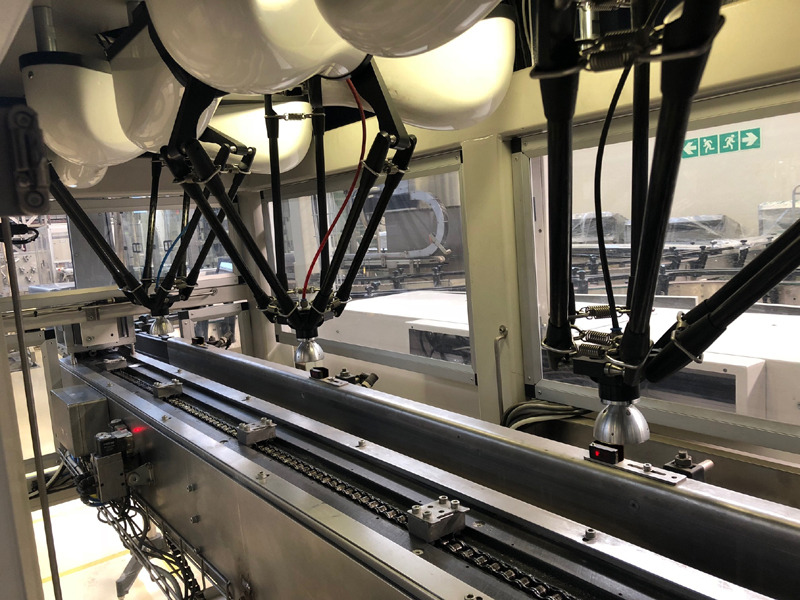 Automobile production and assembly line production have always been closely linked. It was not until Henry Ford began using conveyor belts in his factories in 1913 that the car was able to conquer the world as a mass-produced product.

Today, a working day without assembly lines is inconceivable at the BMW factories. The group relies on innovative transport and logistics to increase efficiency and flexibility, to better link work processes, as well as to relieve employees from repetitive and time-consuming tasks.

These concepts include Omron LD mobile robots for material transport that deliver a particularly high return on investment (ROI). These autonomous mobile robots are equipped with a conveyor tower – a height-adjustable load handling device, developed by system integrator cts GmbH. The interaction between employees and transport robots at BMW impressively demonstrates how factory harmony can be implemented in the factory of the future.
Goal: Continuous optimization of production and logistics processes

Depending on the BMW plant, up to 1600 vehicles are produced each day. With such production volumes, continuous optimization and efficiency gains through innovative strategies and technologies are essential. This also includes logistics and transport processes in production. Various small and large parts, including components for steering wheel and cockpit assembly, rotable parts or interior lights for example, must be transported continuously from storage to the assembly line.

“Employees in the production halls were involved in the transport of components for more than 60 percent of their working time. Merging the different storage and production areas with conveyor belts is impractical, so this step was mostly done manually, which cost valuable capacity,” says Aleksandar Cvetanovic, European Key Account Manager, Automotive at Omron Industrial Automation Europe.

BMW factories have utilized an automated and driverless transport system since the 1980s. However, this system is not flexible in its use and is tied to fixed routes via lanes in the form of grooves. BMW needed a robot that could transport the so-called small load carriers (KLT), to create its own route. This transport robot needed to be able to flexibly and quickly adapt to new processes without having to make major changes to the infrastructure – an advantage over line-guided materials handling.

“At the beginning of the initial project, the first task was to understand and address the customer’s requirements and find out what could be implemented. What’s more, BMW Group Logistics needed a standard for its products and services. The group opted for LD mobile robots from Omron, also known as BMW Mini Smart Transport Robots (miniSTRs), with specially-designed conveyor belt attachments in some of their factories,” Cvetanovic adds.

As a system integrator, cts GmbH, a longtime Omron Solutions Partner, developed a complete solution of LD mobile robots – a conveyor attachment and software that specifically matches the requirements of BMW. The solution combines the Omron Enterprise Manager with the company’s own Enterprise Resource Planning (ERP) system.

Cts GmbH has been using Omron products and solutions for years and is currently exploring new opportunities for the use of Autonomous Intelligent Vehicles (AIVs). With over 100 integrated AIVs, cts GmbH is the largest system integrator of this vehicle technology in Europe.

“Developing an overall system based on the Omron LD, that meets the high requirements of a premium manufacturer like BMW, was a challenge that we gratefully accepted. Drawing on our many years of experience with the Omron LD, which is impressively demonstrated in more than 100 successful operating AIV systems, we were able to implement the ideal solution very quickly and successfully, together with Omron and BMW. Thanks to our extensive software knowledge and product AIV framework, integration into the IT level of the BMW Group was also easily made possible,” reports Alfred Pammer, Head of Factory Automation at cts GmbH.

Since 2015, the BMW Group developed the first self-driving Smart Transport Robots (STR), together with the Fraunhofer Institute IML, for the transport of roll containers on logistics areas within production halls. The second generation is now in operation at the BMW Group Regensburg plant. The robots carry roll containers weighing up to one ton and transport them autonomously to the destination of the goods. They calculate the ideal route independently and move freely in the area. The new navigation method SLAM (Simultaneous Localization and Mapping) does not require any permanently installed navigation transmitters in buildings and thus can be used quickly in a new environment. A built-in battery module of the BMW i3 powers the STR for a whole working shift. The delivery of urgent small parts is handled by a smaller version of the STR – the miniSTR based on the Omron LD mobile robot.

“To fully automate the intralogistics and bring together manufacturing automation with Industry 4.0 and digitization, a solution for material transfer had to be created and job creation developed using the software architecture from the cts AIV framework,” says Cvetanovic. “Our Enterprise Manager fleet management system has more options than other vendor solutions. The narrow and high design of the solution was also beneficial, as there are quite narrow paths and high equipment in use at the BMW plant. However, the main reason that BMW has opted for Omron was the global service and support. More than a good technical solution alone is needed for a global company like BMW.”

The mobile robots from Omron were first implemented at the Landshut plant, with other production sites such as Munich, Wackersdorf, Berlin, Leipzig, Regensburg, Eisenach and Dingolfing currently being implemented.
Millimeter accurate alignment
Mobile robots such as the Omron LD in combination with the customization of cts GmbH allow significant cost optimization with barrier-free material supply, combined with a small footprint – avoiding the typical downsides of traditional conveyor belts. In addition, the robot can be deployed quickly and flexibly thanks to autonomous routes without forced guidance, such as induction loops. The LD robots move at a speed of up to 1.8 meters per second. Thanks to their optional double sensors, guided by special magnetic strips on the floor, the robots can align themselves with millimeter precision. This additional accuracy makes it possible to accelerate the production processes. Users at BMW also praise the reliability of their robot colleagues.
“As the robots move between cells, they detect people or objects in their way, using their own sensors. They then autonomously maneuver around them or stop to let people pass by. For example, the production line operators and maintenance personnel can safely work with LD robots,” says Cvetanovic.

The Omron Enterprise Manager fleet management system ensures that products are transported from one production stage to the next as they become ready. It also ensures that the robots are always charged. Even during hectic times, the robots can be briefly steered into the charging station to give their batteries a boost as needed. At planned downtimes, all robots are sent to their charging stations. The Enterprise Manager also makes it easy to add attachments to robots. If a new one is added, it does not require additional programming. The Enterprise Manager automatically integrates it into the current inventory and assigns it the appropriate tasks.

In addition to enabling more efficient processes in the production halls, the Omron LD robots bring further benefits: the protection scanners provide the LD 90 with the necessary security against other road users, including both machines and people. The system offers process security, while being easy to operate and integrate. Automating the process also makes it cost-effective.

“Automated material handling without traditional conveyor technology, barrier-free material supply and flexible configuration are becoming increasingly important for future-oriented production processes. On top of this, there is also a need for simple adjustments to changing production conditions, such as line shifts or plant relocation,” says Cvetanovic.

“BMW is an innovation leader in the automotive sector, including smart logistics, and through our partnership with Omron and cts GmbH, the useful interaction between the robot and factory employees will lead the way for other sectors such as the pharmaceutical industry,” concludes Cvetanovic.