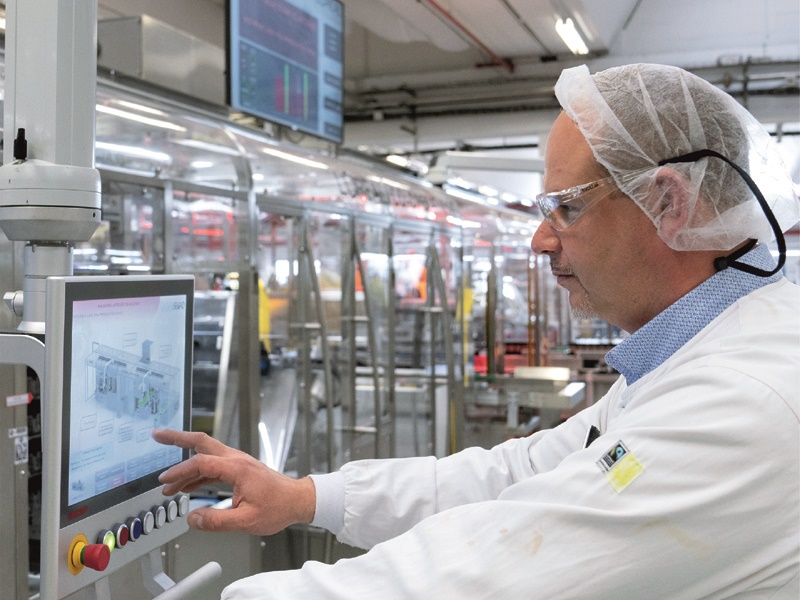 In its Caudry plant France, the L’Oréal Group produces high-quality skin care products, mascaras and make-up foundations for its Division Luxe. Three of the production lines are already based on the eXtended Transport System (XTS) from Beckhoff. This includes the new Agile F24 filling and capping line, which enables fast format changes with a simultaneously increased output, in line with the corporate strategy to increase the agility of its production operations. In addition, the new system combines the functionality of five previously separate machines on a reduced footprint.

L’Oréal is a leading cosmetics manufacturer that produces and distributes many globally renowned perfume and make-up brands as well as body, face, hand and hair care products. Faced with trends such as increasing individualization and smaller production quantities that present challenges especially in the growing luxury segment, the L’Oréal managing board set the strategic goal to make the company’s production operations more agile.

Realignment of the production operations with XTS

Previously, the production of make-up foundations in Caudry consisted of multiple machines from different vendors that were connected in a conventional material flow through conveyor systems and product buffers. However, due to its lack of flexibility, the line was no longer able to support the growing bandwidth of product variants and the economic production of increasingly smaller lot sizes.

Therefore, L’Oréal decided on a fundamental realignment by implementing an innovative line that would accommodate the production of all formats combined with speedy changeover capabilities and be available at optimized manufacturing costs. The new line, called Agile F24, was planned by a L’Oréal team of nine under the leadership of Franck Lefort, project manager at the Division Luxe. The system specifications were developed in cooperation with machine builder Secad. Following an evaluation, the parties decided to replace the existing machines with a single line based on the intelligent transport system XTS.

According to Franck Lefort, the biggest challenge of the new implementation was to make the overall production process independent of rigid machine cycles: “While we previously solved this problem with conveyors and product buffers between the machines, one of the key advantages of the XTS lies in the individual control of the movers. This capability enables machine cycled to be decoupled from the duration of individual processing steps, for example, by installing the more time-intensive processing stations simply multiples times along the transport route. This optimizes material flow and improves productivity.”

XTS at the core of a new solution

The new system layout is based on an XTS with a circumferential track length of 22 meters and with 40 movers as its core element. The various stations for filling the make-up foundations are arranged along the intelligent transport system. The filling process includes six work steps: infeed of the bottles, filling, adding dispenser pumps, caps and labels, and outfeed of the finished products. For infeed a handling robot is used, which takes two or three empty bottles from a tray and places them into transport containers fastened on the movers. In the following stations, robots or handling systems fill the bottles, insert dispenser pumps or droppers (depending on the product), screw them on, and place a cap on top. Next, a laser code with the color, lot number and expiration date is printed on the bottle and a label is applied. At the end of the XTS circuit, the filled bottles are placed onto trays and forwarded to a cartoner.

A key advantage of the XTS is the individual control of its movers, with each bottle being transported through the processing stations by a single mover. Depending on the required processing time, the mover is able to stop and to accelerate with the bottle after completion in the direction of the next process step. This eliminates the necessity to execute differently timed processing steps on separate machines and to provide complex interfaces and product accumulators between them. Instead, the XTS integrates the previous five machines into a single system. Through this integration and the compact design of the XTS, the system footprint could be reduced by 30%. In combination with the increased output of the system, the productivity per unit area could be increased significantly. In this way, L’Oréal will be able to meet the increasing demand for luxury cosmetics in the future without having to expand its production floor area. The resulting investment security is also protected by another key benefit of the XTS, which is increased flexibility.

Through the software-based control with TwinCAT, the XTS can switch between different product variants by means of the corresponding parameter sets. This capability makes it possible to process different formats on a single line instead of having to use several machines. Another benefit is provided with regard to the production of minimum lot sizes: “In terms of flexibility, the XTS is the core of a new solution that allows us to switch to another color within seconds. This means we can both reduce lot sizes and meet changing customer requirements”, explains Jean Yves Vey, plant manager at the Caudry site. The time needed for format changeovers was cut in half and the system availability was increased. The same line can now produce lot sizes ranging from a few hundred to millions of pieces as well as seven different format types with only 40 instead of 300 transport containers. Jean-Yves Vey also mentions other advantages of the TwinCAT-controlled XTS in connection with quality assurance: “The centralized control principle of the XTS system makes operation, and quality management tasks in particular, much easier. These include sample removal, running the line empty if necessary and checkweighing. All these tasks are fully automated including RFID support.”

In addition to the XTS, further automation tasks are implemented in TwinCAT, resulting in a uniform and centralized control platform for the entire system. Such additional tasks are sequence control using PLC software and integrated axis control, cloud connectivity and other machine functions, such as e.g. robotics and HMI based on TwinCAT. Additional Beckhoff components are used, for example, with the space-saving HD EtherCAT Terminals installed in the control cabinet or the EtherCAT P I/O modules with IP67 protection. The EtherCAT P components, which can be positioned close to the various sensors and actuators, transmit communication and power via just one cable, which simplifies wiring considerably.

Beckhoff also supplies 39 servomotors from the AM8000 series for the system installation, which together with the EL7211 EtherCAT servomotor terminals or the AX5000 Servo Drives serve as drive axes in various handling devices. Here, too, One Cable Technology (OCT) reduces cabling requirements significantly by transmitting power and feedback signals over a single standard motor cable.

Cooperation with potential for the future

With the help of XTS and PC-based control, the client was able to develop a production line for the flexible, future-proof manufacture of cosmetics that meet high quality requirements and new consumer expectations. Operators can control the entire process including all quality checks and sampling on their own and execute format changeovers quickly and easily. After this initial success, the L’Oréal Group decided to continue its cooperation with Beckhoff in a long-term partnership to implement more of the modular and agile production lines.